The Hulk (Bruce Banner) is a protagonist in Marvel Comics. 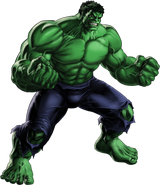 The Hulk as protrayed by Lou Ferrigno

The Hulk as animated by Boris 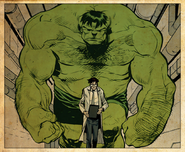 The Hulk and Bruce Banner

The Hulk as seen in Marvel VS Capcom 2
Add a photo to this gallery
Retrieved from "https://fatal-fiction-fanon.fandom.com/wiki/Hulk?oldid=20033"
Community content is available under CC-BY-SA unless otherwise noted.